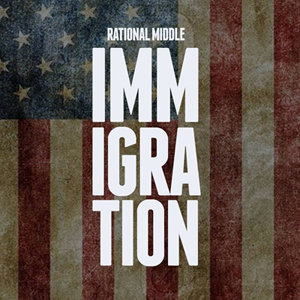 The following article was authored by Scott Braddock and published on Construction Citizen.

The filmmakers at the Rational Middle have now also launched a podcast tackling the tough topic of immigration. Their video documentary series on the issue, which you can check out here, offers a primer on how the United States arrived at the broken immigration system it has today.

“Extremes on both ends of the political spectrum have fueled a firestorm which has led to the spread of misinformation, stoked division, and slowed progress on finding a modern solution for immigration,” said filmmakers Gregory Kallenberg and Loren Steffy on their website. “We have strayed far from the path of understanding the economic and moral arguments and all recent attempts to fix the broken system have failed.”

That’s why Kallenberg and Steffy are working to, as they put it, create a space in which real conversations can take place hopefully leading to a solution.

Some of the guests so far on their new podcast include David Bier, immigration and policy analyst with the Cato Institute; Stan Marek, CEO of construction firm MAREK in Houston; Yael Ross with Children at Risk; and Rep. Dan Crenshaw, R-Houston.

"It's really hard for our existing employee based to get their kids into construction," Marek said in his interview with Steffy. "Without immigration, it's going to be really hard to find people who will go out and get on a roof all day or hang sheetrock all day...even for really good money," he said, noting that average wages can be more than $20 per hour. “That’s really good money but it's hard work.”

After Hurricane Harvey ravaged a wide swath of the Gulf Coast two years ago, Marek said he and others in the business anticipated a surge in people entering the workforce for the rebuilding effort. "But that wasn't the case," Marek said.

"Without immigrant labor, it's going to be a battle," he said, arguing that those who are new to the workforce must receive not only safety training but skills training as well. Those skills will make them more desirable to employers, driving up demand for what they can offer in the marketplace.

Because he and others in the industry are committed to that kind of training, Marek said it is infuriating to hear critics claim that construction companies are primarily interested in immigration reform for the sake of “cheap labor.”

“That’s not how that works,” Steffy pointed out.

You can listen to their entire conversation here.

All episodes of the new podcast are here.